I've been saying that home is where the barre is, but last week I found myself a new home. Initially, this was not by choice but out of necessity. My old building is undergoing massive renovation and us renters were asked to vacate our apartments by a certain due date. I found my new place pretty much last-minute, and had to arrange everything within a week. I gotta tell you, I haven't been this tired in years. Did a crazy amount of sorting, recycling and throwing stuff out, packing, lifting, carrying, and unpacking stuff. The amount of said stuff one person accumulates over the years is just unbelievable. I finally had to say goodbye to stacks of ancient Dance Magazines (I saved one), shabby leos and even most of my old (pointe) shoes. But I did make a few fun discoveries in the process, like ballet programmes I had saved from almost twenty years ago.. 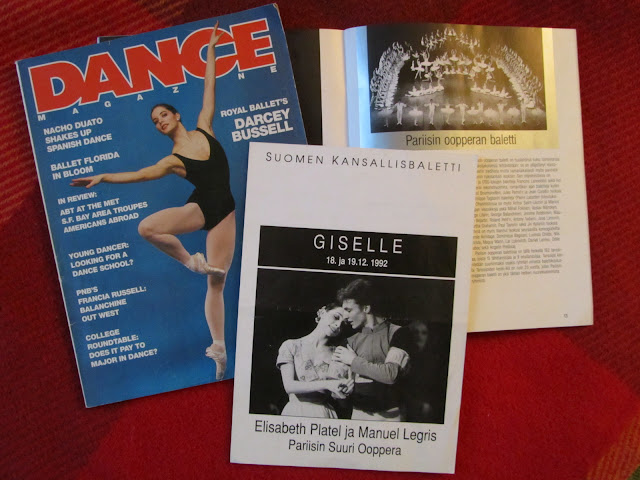 Well, I couldn't throw Darcey out! The issue is from September 1994, and Darcey was hailed as a Balanchine natural..  The programme in the middle is from Platel's and Legris' guest performance in Giselle, here at the Finnish National Ballet. I can't believe it's been twenty years! I still remember that night, it was pure magic. Legris had the most insane batterie, and Platel was just so delicate and beautiful. Another thing that continues to amaze me: I have danced a small bit from Giselle on that same stage! Of course it's not the National Ballet's stage anymore (they moved into a new building), but I love the history of that old theatre. On the far right is the programme from POB's 1995 tour to Finland. I got to see "Paquita" (Grand Pas and Pas de Trois), Balanchine's "The Four Temperaments" and Forsythe's "In the Middle, Somewhat Elevated". Etoiles such as Nicholas Le Riche, Laurent Hilaire, Monique Loudières, Isabelle Guerin, principal dancers Agnès Letestu, José Martinez, and up-and-coming dancers such as Aurélie Dupont. It was absolutely breathtaking and flabbergasting, and I still remember the chills down my spine.

In between the packing and unpacking I managed to sneak in a few ballet classes. Which I can barely remember, I was that tired. But I needed class so bad even a snow storm couldn't stop me! My body was in all the wrong kinds of pain: stabbing needles in my neck, weird aches all over - I knew a good barre would set me right again. And that it did, although it took me almost a week to recover fully. Meanwhile, lots of wobbly balances and spaced-out moments mid-music. Who knew left and right could be so hard to keep apart? But I'm good now - and happily settled in my new-home-without-a-barre. It's a tiny studio, but neat and with a nice view into the woods and the sky above. The name of the street has a poetic sound to it, and if I were to translate it into English, I could say I'm living on a moonbeam.. Kind of fitting for a former wili, don't you think?

My Big Move inspired me to make another change: I moved my barre spot in class! We had to switch studios because one of the fixed barres snapped into half, and apparently you can't buy spare barres off the shelve. So while we wait for our new custom-made barre to be delivered, we have taken over the big studio with the grand windows and view to the theatre and Finland's biggest department store. It's a nice view, with Christmas lights and snow-frosted trees. I had already settled back into my old spot, but after moving homes I decided to be bold. I switched in front of a window, which is a bit drafty this time of the year, but I get to see myself in profile to the mirror. It's not my favorite angle, but that's why it makes sense! My teacher noticed my move too, and thought it a good idea. Now I can check my alignment in the mirror and adjust my popo, turn-out, heels, and whatnot. Mind you, this is not a permanent move. Once we get back into our regular studio, everyone is likely to return to their old spots. Still, it all feels like new beginnings..