Get Your Face On

I'm pretty good with my port de bras. At times I have to watch out for the droopy elbows, and take care that fingers don't freeze into positions. Oh, and make sure that arms are not too high in first, and not too far back in couronne. But, all in all, I think that my port de bras is one of my stonger suits. This, however, is not the case with my port de tête. I know to look sideways when the steps call for it, or front when it's first arabesque - you know, the basic directions. But other than that, my face and eyes tend to stay too much straight ahead. It makes my dancing look static, like I'm just going through the motions.

"Present yourself!" It's perhaps the most frequent guidelines we get to hear in class - and personally speaking, one of the hardest. I get shy in front of an audience, even if it's just the teacher and my classmates watching. Not the kind of shy where I blush and retreat to the corner, but the kind that has me dancing smaller than I could. Like a wallflower, instead of a blooming rose.. I hesitate to put myself out there, to get my face on and dance full out, expressions and all. I'd rather keep my poker face, check my alignment in the mirror and smile mostly on the inside.

Somewhere along I forgot that dancing involves the entire body, literally from head to toes. Partly it's because the performing aspect is fairly new to me. Before, ballet class was something I did for myself only - in the sense that an (imaginary) audience was never part of class. I enjoyed dancing as such, and did not give much thought to what my face looked like or when and how I should tilt my head. Or how to project and present myself. But I'm getting there.

Seeing myself on video has definitely helped. After you get over the cringe-factor, it's an excellent learning experience. I could see that while my chaînés turned alright, my head was too slow to spot. It made my turning look sluggish. I could also see that the lack of port de tête makes my dancing look boring, which is not the quality I'm looking for! One of my teachers (Marie-Pierre) saw our spring show, and noted the same (the static head - not the boring aspect). Yesterday, she told me that she had planned to work on this with me, but during the long summer break kind of forgot about it (we have been focusing on other things). Anyway, we had a short chat before class about the upcoming show, and then she made me work like I was on stage already. Marie-Pierre reminded me to use my head and eyes and gave me exact directions, even through pointe class. When to tilt my head in pas de bourré, change directions, or how to present myself - not just the basic academics, but the dancing. There is so much to learn, so much to express! A subtle movement here, a big pose there. Nuances, shades and colours. Time to get my face on. 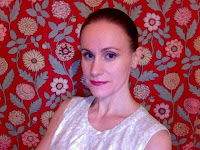