"You Should be Doing Triples"

"You should be doing triples." Just something one of my teachers said last Saturday, during pirouette exercises. Before that, I had managed a  few wobbly doubles and a couple of fairly neat singles. Okay, I was really tired (late Friday night), but that's not my excuse. The truth is, that after twenty years of ballet, I'm still working on turning consistently clean doubles. With pirouettes there's always so much going on, so much that can go wrong, and a whole lot of corrections that you can work on. Believe me, I've tried them all. The hardest part has been un-learning bad habits, like sickling the foot in passé retiré or jumping into the turn. That is why, if I were to give you one piece of advice, it would be this: quality must come first! Then, a deep plié and remember to breath! Oh, and it's perfectly fine to make a lot of mistakes. Believe me, I've done them all. It's also fun to keep trying, even after 20 years and counting.

Back to the "you should be doing triples." I'm not sure if I should be encouraged or embarrassed. Part of me feels like there was a test that I failed, and that I'm missing important ballet credentials because of it. A few years ago, I got a similar comment from another teacher: "You should know how to do fouettée pirouettes." It seemed odd to be graded in class, considering that we were all recreational dancers (some with more experience than others.) The thing is, it is quite rare to have adult ballet classes with a progressive curriculum all the way up to advanced levels. Even though adults can learn some things faster than children (and often have better focus), technique takes time and dedication. When I moved from basic-intermediate to intermediate and advanced levels, the gulf between those classes was such that I'm still trying to cross over! Fouettée pirouettes were done at the end of class, and you either knew what you did or you got out of the way. It did not bug me, I never expected to be in the same league with the ballet vets and semi-/pros. Even when another teacher introduced Fouettées 101, I did not catch up. I guess, you can't win them all.

I've never been embarrassed that my turns are not up to par (annoyed, yes). But I have sometimes felt dispirited by my lack of flexibility and range of movement. I used to dread split stretches in class. I hated being the only one who could not make contact with the floor. To me, the message was that I was not flexible enough for ballet (past beginner levels). It made me feel excluded from the rest of the class. Well, I've gotten over it. I stretch as far as I can, and I don't care if it looks less than ballet-ready. You can only work with your own body, not that of bendy-ballerina's next to you. Anyway, in the past three years I've actually gotten a lot more flexible! I can do a split with my left leg in front, I can stretch my legs into a semi-sidesplit and lie flat with my belly in between. Talon à la main? I can now lift my left leg up way past my shoulder. The stiffer right one is also coming nicely along. I still wish that I could be stretchy like a ballerina (who doesn't?), but I've stopped fixating on my weaknesses, or stiffnesses. I think having a positive mindset even helps with the stretching!

The comment my teacher made? I've decided to look at it as encouragement. Clearly, I must be doing something right. I have taken less than ten classes with this particular teacher (half of it last summer). He does not know my history, and has not seen my progress from adult beginner to adult passionate. I don't know what he sees when I dance, but I like to think it's something good.

Finally, some things you should be doing in class:

Knees over toes, always.
Breathing into the movement - it's good for you.
Mistakes. Because you're trying.
Pay attention to details. It's all in the details!
Keep your popo down and your head up.
Look where you're dancing.
Smile. You love to dance - don't keep it a secret. ;) 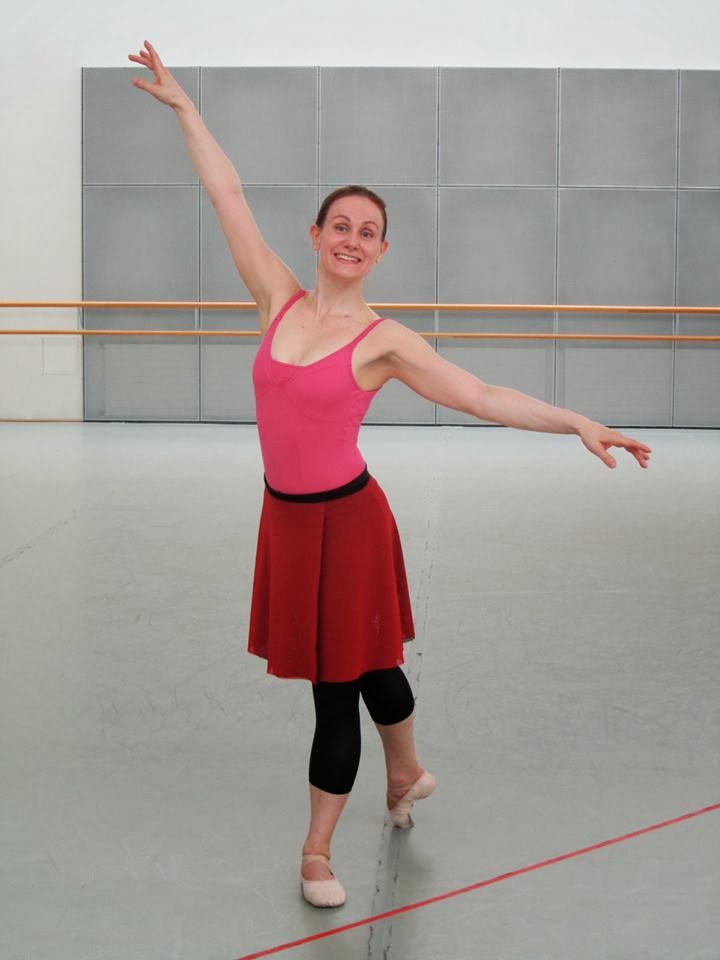 Pointe class. We're all facing the barre, doing really slow relevés. I let go as often as possible, because I like the added challenge of trying to stay in balance. Anyway, it's hard work and I'm totally focused, like there's nothing else in the world. My teacher approaches me to give a correction, or so I assume... Instead she tells me that I can now play with it, specifically with my head. I know she is talking about port de tête, or the carriage of the head, but I do not know what to do with mine during that particular exercise. Should I incline it, look left or right, or what? My sole focus has been on my feet, on keeping the popo in line, the back and neck long, the shoulders relaxed and myself breathing. It did not seem like playtime. But I did get the feeling that there has been some sort of achievement, and I was being challenged to step it up.

Later on, I got the feedback: there has indeed been progress. According to Madame, my dancing has improved. The port de bras is more confident, as is my overall technique. She even pointed out the alignment of the passé retiré I'm working on, telling me how much better it has become. I told her that I haven't really noticed. Which is not entirely true. I have noticed that my dancing feels different. Stronger, more balanced, perhaps even more fluid. But when you are not seeing yourself, how can you tell? Feeling good does not automatically mean that you also look good. Ballet can be tricky like that. Of course, there are some things which are more obvious. Like pirouettes. You cannot not know when you have turned three instead of one. You know when you're right on your axis, because it feels awesome. And you know when you've landed in style. Just as you know when you've failed. At my current rate, it's fifty-fifty. I get half right, and the other half is negotiable at best. Pirouettes tend to be a dealbraker for me. If I fail too many, class doesn't feel like progress. Yes, I know I'm giving way too much importance to turns. After all, our art is called ballet, not pirouette.

Then there are extensions. Why do we get caught up in degrees anyway? It might have something to do with all those sky-high extension you see posted and pinned on the internet. But bringing your leg into a developpé is dance, not a competition. It was already my first teacher who stressed the journey, not the destination. My current teacher speaks of caressing your (standing) leg as you bring the foot up. Then, raise the knee as high as possible (without compromising proper alignment), and draw a line with your pointed toes as you unfold your leg. The height of your extension is not the point, the quality of movement is. There's a bonus: quantity often follows quality. I've been told that my extensions have been getting higher since I started working with Madame. And this after dancing for twenty years! Funny how these things escape your attention...

So, what is next? We all know that ballet never gets easier, you just get better. For me, this means shifting my focus to the port de tête. My teacher knows that I get shy in class, which is why I tend to dance too much to the front, looking "flat" in the process. Now she is asking me to "play" with my head, and I have to admit that if feels more difficult than any fouetté pirouette I have ever attempted. At the same time, it's also way more exciting! Playing means there's room for self-expression, for making up my own mind (and head) about how I want to dance. Well, not in the sense that I get to change the exercises. I don't even want to do that! No, it's more subtle than that. Nuances and shades - that's what it is.

Now I just need to figure out what to do with my port de tête. I told Madame as much, that I don't really know (unless it's clearly part of the given exercise). She told me that if that's the case, I should just copy her. My dear readers, if you've ever seen our teacher dance, you know that is an near impossible task! Everything she does, looks natural and elegant. But I will try my best to absorb something and make it my own. I don't know what will come of it, but I want to find out.
at February 09, 2014 3 comments: