Ballet Class Outfits: Make Your Own 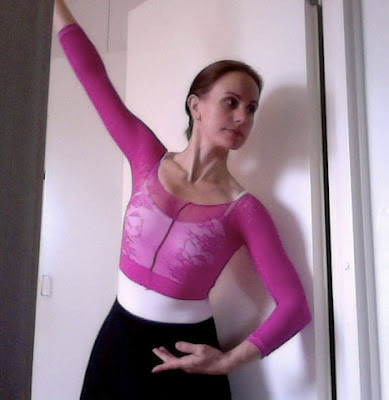 The first time I made my own cropped top, I recycled an old pair of black leggings - but why stop there? You can find lots of leggings and tights in the sales bin; in colours and textures you would not normally wear. Like these pink lace leggings I just found for 1,85 euros. They look way too much 80's Madonna, but when you cut out the gusset and pull them over your leo - instant fun fashion update! 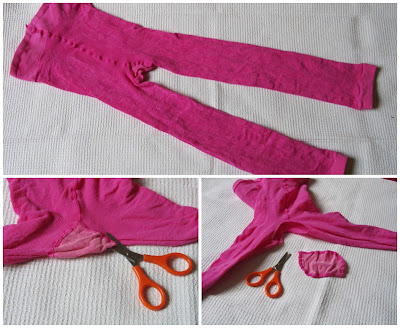 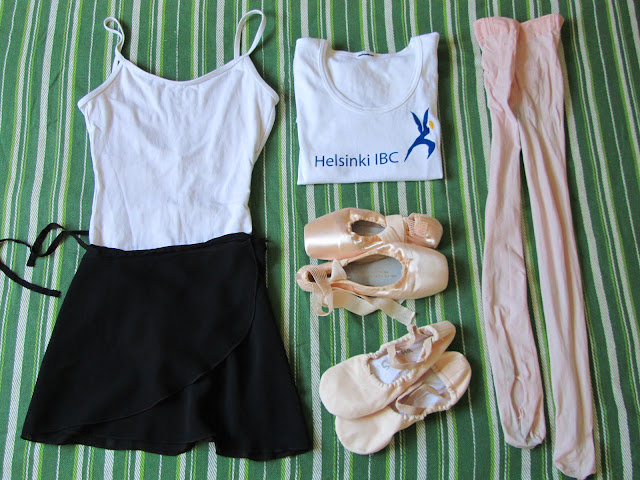 Sometimes I like to fall back on the classics. A simple white camisole leo, pale pink tights and a short black tulle skirt. Hair in a neat bun, polished off with hairspray. Classic ballet student. When I took this photo, both flatties and pointe shoes were still new, but they have since earned their class cred. The t-shirt was earned volunteering, but I usually loose any extra layers before barre is over. Too hot! By the way, have you noticed how ballet pink tights turn into a whiter shade of pale? And then look more white grey-ish than "natural" on your legs? Not that pale pink is a natural shade to begin with. Really, what grown-up woman would wear pantyhose in such a shade? But us ballet students do, that is when we are not in black leggings. Which reminds me I need new ones, all my tights have snags and holes. Not so classy.. 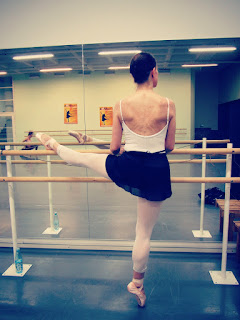 You recall how I wrote about having to cut over two thirds of my daily ballet? Even worse, looking at the months ahead, I have been thisclose to cancelling all my classes. As a fellow dancer, can you imagine anything more pathetic? While I've been working at improving my situation, many of you have supported me with helpful advice and sympathetic comments - and I give you my heartfelt thanks. You readers are awesome! Not everyone (outside of ballet) is inclined to understand the need for an adult recreational dancer to dance. I have been told that I will adjust, that twice a week is better than once, that once is better than not at all. That less should still be enough. Of course I can adapt, my life is not going to fall apart if I dance less - but why should I justify my want and need to dance more?

This is the time to dance. I'm still relatively young (dance keeps you that way), I'm in good shape and there are very few responsibilties to restrict my dance schedule. There's even time for other interests and activities. It's almost an ideal situation, and if it weren't for the "almost", I would be one happy dancer indeed. Here's another difference between us hobby dancers and professionals: the pros get paid to dance. Ballet class, rehearsals, performances - just like another day at the office, only not. I could be envious, but I know that being a professional dancer is one the toughest jobs out there. And even though it's hard work, this is rarely reflected in numbers. You're not going to make a lot of money dancing. Why then would anyone want to make a career out of dancing? I suspect it's the same desire that drives us recreational dancers to class after class. Dance is just plain addictive.

Coming down from daily ballet to twice a week has been hard. There have been withdrawal symptoms: restless feet and anxious dreams of missing class and not fitting into my leos or shoes. I have gone walking/jogging when I normally would have been in class, and I have done stretches and some ab work at home. But it's amazing how quickly you notice the difference! In just one month I have gone softer and less limber. Even my teacher recommended I should work out more to compensate for less class time. Yikes. The problem is, I don't really like to exercise. The gym is just not my place to be. Although, if it could be functional training to aid with my dancing.. That would be okay. ;)

NEWS! Since I started writing this (first draft was done a week ago), there has been a new development! I can't go into detail here, but it's safe to say that I don't have to quit dancing, at least for the time being. Even better, I get to dance full-time for the next two months! Daily classes! I don't know yet what happens after that, but right now I feel like I could grand jeté down the street. Which I might just do.

From Boston to Helsinki, with Love


Mind-blowing, breathtaking and beyond awesome - Boston Ballet came and brought the house down in Helsinki! For real, it was so good I wanted to cry. Jorma Elo is a genius, his Plan to B possibly the best contemporary piece I've ever seen. The choreography is as hard as it gets, and then some - but his dancers deliver - and then some! I'm now officially a fan of the gorgeous Whitney Jensen, and of both Cirios (Jeffrey and Lia). Heck, everyone who came to Finland and danced blew me away. The men were dazzling and strong, crazy with the jumps and turns. The women were powerful, limber and elegant - and equally crazy with the jumps and turns. What also impressed me was how well they all danced together. Such a fantastic ensemble!

The evening started when the Artistic Director of the Finnish National Ballet, Kenneth Greve, stepped in front of the curtain and introduced Mikko Nissinen of Boston Ballet. And here's a curious fact from my life: I have once been in the same ballet class as Greve and in the same class as Nissinen! I kid you not. The latter came to my old school's morning class sometime in the nineties (can't remember the exact year). It was summer, and Nissinen on vacation (he's Finnish, you know). Our 10 am morning classes used to attract a myriad of professional dancers who at the time didn't have access to company class. Anyway, I was fairly new to dance and blissfully ignorant. But I could tell the pro from the amateur, and when Mikko Nissinen took to the floor, you just knew. He was still turning when everybody else had already finished. Amazing control, and handsome too. ;) As for Greve, he once came to our advanced class at my current school. Usually you wouldn't expect the AD of the National Ballet to venture out of his company for class, but his wife Marie-Pierre happens to be our teacher. I have to say, for someone supposedly retired, K. Greve has serious skill! It was a bit distracting to be in the same class, but in a cool way. And he was very unassuming and friendly. Looking at the two directors on stage, it made me wonder how ballet is such a small world that even I could be connected by less than six degrees!


I can only imagine how proud Mikko Nissinen must have felt yesterday. It was the first time that he presented his company Boston Ballet in Finland. You know, Mr. Nissinen was once considered for the AD's position at the Finnish National Ballet. In the end, I think that his management style and strategy came across as bit too tough for local likings. I don't know/remember for sure, except that company dancers have a say in the manner. But I'm glad he found his place in Boston, and he sure has made a success of it. As a fellow Finn, I admit to being a bit proud of his achievements! But there's no company without dancers and no dances without choreographers. And Boston Ballet's program delivered real treats.

First we got to see Christopher Wheeldon's Polyphonia, which struck me as an exciting hommage to Balanchine - whilst coming across as new and inventive. There were acrobatic elements which demanded extreme flexibility and strength, and instantly recognizable classical vocabulary. Both came together like they had never been seperate before. The music by Ligeti was challenging, but the various moods were beautifully illustraded in the dancing. Especially one pas de deux with blue back-light was so intense it made my arm hair stand up. Elo's Plan to B was next, and I already gushed about that. Let me say it again: wow.


Among the ensemble pieces we got to see a sole pas de deux choreographed by Helen Pickett, called Tsukiyo. The music was one of my favorite pieces: Spiegel im Spiegel from Arvo Pärt. Coincidentally, Wheeldon has choreographed his ballet After Rain to the same music. It was a lovely and delicate number, but somewhat overshadowed by the rest. The final piece was from Forsythe: Second Detail. Again, very powerful dancing and superb ensemble work, but the music was a bit taxing. Even so, it was one of the best dance nights I have ever experienced. It lifted my spirits and made me want to soar with those amazing dancers on the stage. This is why I love dance so much.