I should have tossed these old work-uniform pants out long ago, but I like to keep them as a reminder. This is what happened to me when I quit dancing nine years ago. It wasn't a conscious decision, but at the time I was going through some rough personal stuff. Dancing was simply the last thing on my mind. I never decided not to dance, I just didn't go back to class. The weeks rolled by, then months, then years. I turned into a couch potato, potato chips and chocolates in one hand, remote in the other. The extra kilos kinda crept onto me, I never saw it coming until it was all there. 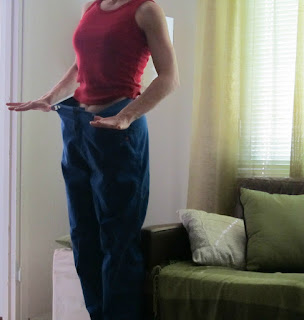 New friends who didn't know me from my dancing days, never considered me fat - just voluptuous or "well-rounded". And after I was done grieving (the personal stuff I mentioned earlier), and had my life and groove back again, I honestly didn't care about the surplus of pounds. Not until hot summers and chafing thighs (sorry if that's TMI ). Not until I was actually told by a health-care professional that I had become officially over-weight. Not until I yearned to dance again.

At that point, I felt embarrassed. I wanted to dance but I didn't want to go back to with all my added weight. I hated the idea of anyone from "before" seeing me. Now I wish someone had just kicked my butt back into class right there and then! I wasted another year not dancing. But everything changed six years ago, when I convinced a friend of mine to take ballet in addition to her modern classes. I took her to my old school, and we watched a ballet barre through the glass door. It hit me right there and then. I should be in that class! I had managed to loose a few kilos, but that wasn't why I was ready to go back. I just needed to be in that ballet class so badly, it hurt. It was a happy hurt, if you know what I mean.

The first classes were hard on the body, but not so much on the mind. I was a bit shocked to see my former slim dancer's body enlarged in the huge mirrors, but got over it when I focused on the steps instead. Nobody in that class knew me from before, and that helped my vanity/insecurity a little. My teacher made no comments other than that she was happy to have me back. I relaxed, as much as you can relax when muscles are being pushed back into familiar moves. I started with one weekly 60 minute class, then added another, then more. The weeks rolled by, then moths, then years. Those baggy pants from the photo came loose during the first year and were replaced with one size smaller. The next year it was a smaller size still. Clothes I had kept from "before" started to fit me again.

I never diet, but I try to stay away from too many sweets, cakes and other vices. I like to eat, and I like my treats but I like to feel healthy too. On the days I dance (which is most days), I think about carbs and proteins, energy and recovery. I might have oatmeal and a banana in the morning, a fruit smoothie later, pasta before class, a nutty energy bar, and salad with protein after. Even the occasional beer. Chocolates too. On the few days I don't dance, I just eat whatever I feel like.

My one regret is that I didn't go back earlier. The extra pounds I was carrying had nothing to do with how well I could dance, how others would view me (why even care?) or how much I would love it. Don't get me wrong, I'm very pleased and proud to be slim and fit again - but all that has just been an added bonus. You can look at my photo and see the "before" and the "after", but I didn't return to ballet to lose weight. I returned because I had to. The excitement of learning new steps, the joy of moving to the music, the sweat and happy exertion that is ballet class. I needed to feel the sheer bliss of dance again. There is no more "before",  only now - and let us all dance happily ever after.
at July 12, 2012

Email ThisBlogThis!Share to TwitterShare to FacebookShare to Pinterest
Labels: ballet and losing weight