Definition of potential: existing in possibility : capable of development into actuality. 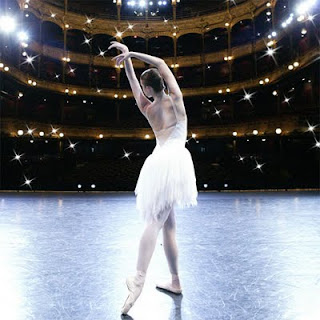 It seems the time has come to sink or swim, or more to the pointe - to pull up or topple over! It has been some eight months since I first went up on pointe, and until now we have always started our class with both hands on the barre. That is until yesterday, when Marie-Pierre (Madame) gave us a shortened version of a regular barre to do - you know, with one hand only for support. Of course, it was a different barre from the one I had done just 90 minutes ago in our advanced class - now we did all our pliés, relevés and balances up on our toes. The first exercise went like this (I´m trying to repeat my teacher´s instructions):
In first, relevé - demi pointe - pointe - plié - plié - demi pointe - down. Relevé - pointe - cambré devant - cambré derriere - demi pointe - down. This in all positions, with port de bras in 2nd to both sides, and in 5th grand port de bras going all the way around. I gotta tell you, bending your body over while up on pointe - no easy feat! But it just kept getting better.. For our next exercise we did degagés: From 5th, degagé piqué - degagé piqué - degagé into plié - from plié into relevé with working foot brushing out (45 degrees) - repeat in all directions. I learned that you have to transfer your weight very quickly onto the supporting foot and pull up like crazy!
In addition we did rondes de jambes, with the last one rising up again onto full pointe and finishing with a grand ronde de jambe en l'air. Then developpés in all directions, and grand battements - all on pointe. But when Madame told us to finish with arabesque penché, I just thought you gotta be kidding me. Right? You seriously think I should be able-bodied to pull that one off? It is hard enough on demi-pointe, wearing soft slippers! Of course, I could not do it. To have your entire weight on that small platform, the back leg high up and the upper body in deep forward-tilt.. Oh dear. Talk about leaving your comfort zone behind!
After this first part of our class Madame asked if it really had been so much more difficult than our regular two-hands-on-the-barre. Cue my head nodding, vigorously.  She had apparently thought it would be less strenuous than our usual intense work-out, and come to think of it, true. However, it was still too difficult, at least for me. I really need to get my feet under me first, to find those muscles and turn-out and pull-up. That´s why I like to do even them slow killer relevés! But then came the big surprise: Madame asked us what we had been doing with Gabriella before..
Side-note: Gabriella was our ballet and pointe teacher until last November, when she left to welcome her second child. She is coming back already this summer, which I´m very happy about. And Marie-Pierre will also continue to teach come next fall. How lucky are we?  :)
Which is curious, since Madame had come to observe us in September. But now that I remember, she didn´t stay the entire class (as she had already watched one hour of basic beginners and 90 min of advanced class). Anyway, our class has been a mixed-level from the get-go, but at the barre we had started from pointe zero (pun intended), so that even beginners like me could take part and learn. Although we have been able to progress fairly quickly because either there are those with previous years on pointe or those with many years of ballet experience (for me, 17 years in total).

Anyway, when Madame asked, I told her that we had been doing pointe with Gabriella for only two months! And she said that she seriously did not know this! Sure, I can understand, because of the mixed level and some of the girls/women being already quite advanced.. BUT, it just kills me that for the past half year she has been assuming that I have been doing pointe for much longer! I never said anything because I thought it was obvious that I had not! This does not mean that I am somehow more talented or special. No, it means that she thought my skills were such as they are despite previous training! Which as you know I never did have! Jeez.. All those times when she told me you do not have to do the pirouette (or something else), if you don´t want to... and it´s not that I did not want to, but that I had never done it before. And the time I finally did a double, and the first thing she did was correct the position of my talon.. when I was just thrilled to have dared it in the first place!

Potential : The inherent ability or capacity for growth, development, or coming into being.

I mean there is no real damage here, even though Madame might have sometimes given me easier stuff to do instead, and maybe she would have expected less of me. I don´t know. But I have been getting corrections for every exercise we have ever done, and encouragement and positive feedback throughout. I think most other teachers would have raised a pronounced eyebrow at my very apparent lack of skill, and probably reprimanded me at every turn (no pun here). Even worse, they might have deemed me as a hopeless adult wanna-be ballerina with no talent whatsoever. Instead I have been the luckiest girl in class! You see, Madame is a very demanding teacher, but she is also very sweet and caring. She really sees the potential in every dancer, long before you yourself have figured it out. 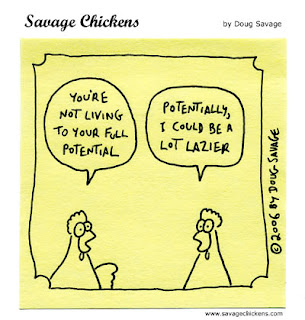