Ballerina for a Day 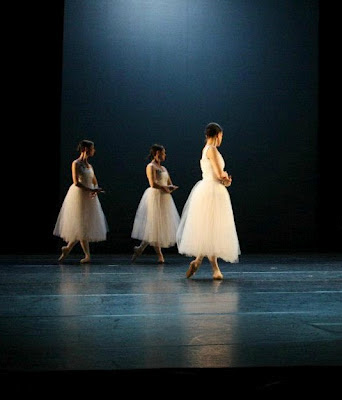 Dear Readers, where do I even begin? It has been a whirlwind of a weekend, two fabulous and exceptionally warm summer days here in Helsinki, but me - I was more than happy to stay inside the theatre! Classes, stage rehearsals, make-ups, warm-ups, last-minute corrections, jitters and nerves, dancing, excitement and applause - all over much too soon! You get hooked on this stuff, you really do. As a recreational adult ballet dancer you are mostly "confined" to the studio, which is by no means a bad thing - but who hasn't dreamed of dancing on a real stage in front of a real audience? This past weekend that dream came true once more - and I got to be a ballerina for a day! Twice!

We started our spring show weekend with dress rehearsals. The stage is smaller than our rehearsal studio and we all had to adapt and adjust. It was tricky because there was hardly enough time to mark places and do one run-through with the music. There is this bit in Giselle's second act, where we are worshipping Myrtha: kneeling on right knee, left leg front. Your arms go down, nose to left straightened knee, arms and knee up, and cambré back. Repeat four times. I was too close to the center spot, and messing up the star formation in the process. My teacher is a woman of action, which is great, but getting dragged across the stage in my lovely beautiful wili-tutu? Not very diginified! LOL. Needless to say, I remembered my place afterwards. Our Don Quijote rehearsal was not much better. No ballerinas were harmed, but it was a bit of a mess. Not to worry- bad dress reahearsals make for better performances!

Giselle's entrance of the wilis was on Saturday, and what a fabulous day it was! After our dress rehearsal we wilis went out for some lunch; huge chapatas dripping with flavoured oil.. Hey, when you dance this much, you are hungry all the time! Whether it's chorizo sausage in my chapata or chocolate for dessert, anything goes. And for once, nothing shows. Bikini season? Bring it on! After our little feast we headed back to the theatre, it was time for make-up and putting flowers in our hair. How often do you get to write a sentence like that? In our white tulle and white flowers we looked like a bridal party, albeit one that got jilted before the wedding.. But when we finally stood in the wings, ready to step on stage, it was magic.

Not perfect, by no means, but it was wonderful. In the first performance I stumbled during a simple pas de bourrée, in the second I lost my balance in arabesque. Thank goodness my wili-partner stood her ground, otherwise we would all have tumbled like dominos! Apart from those small mishaps, everything went well though. I even got swept away and into character. Intense stuff. But it was over too soon! I want to go back on stage! And on Sunday, we did.

Our 8-minute all-levels Don Quijote-style dance was a success, in the end. The beginning, not so much. After our teacher had given us a 30-minute warm-up barre (very pro), I practiced some of the trickier parts, my entrance included. Was feeling pretty satisfied and semi-secure with my efforts. Then, right before the first diagonale: attack of the jitters! I know that dancing on the stage is different from dancing in class, nerves can get the better of you. A friend of mine once said that you leave 20% of your skill in the classroom anyway. In my case it felt more like reverse: 80% was left stranded in the studio, and 20% made sure that I still could walk if not dance on the stage.. Seriously, my glissade assemblés and piqué attitudes sucked, as did the chassé - temps levé arabesque, followed by pas de chat. No excuses here. After that sorry entrance, I figured things could only get better - and they did! Right until the end, when I nailed my solo chaînés and grand jeté!  As a group we did really well, especially after the initial nervous excitement disappeared. A friend of mine was in the audience and said that we looked like we were dancing for each other and for the audience, and enjoying every moment of it! What a happy ballet-buzz :) 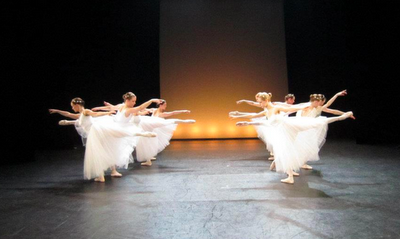 From one stage to the backstage.. I have had no time to yet to recover from our spring shows, but Monday morning I reported for volunteering duty at the Helsinki International Ballet Competition! Next post: For the Love of Ballet.
at May 30, 2012