Stretch your knees, lengthen the back, dance bigger and keep your popo under you! I know, I hear you.. popo what? That is how Madame addresses our ballerina derrieres. The first time we heard it, you could see the collective head-scratching going on. But as there was only the butt to point down in the given context, class was saved from getting lost in translation.


Apparently the French popo is a diminutive form of the French popotin, or as we would call it in English: your bottom. By the way, I said the class was perplexed. Curiously, I was not. You see, I lived my childhood in Germany and der Popo is popular usage there - mostly when talking to children. And both the French popo and the German Popo possibly derive from the same ancient Latin podex. But popo sure sounds nicer!


I thought it so cute to have once again a popo instead of a butt or the usual tailbone! Because not a class will go by when the portrusion of our popos is not an issue to be addressed and corrected. Dancers may have the firmest and shapeliest derrieres there are, but in ballet these are not to be flaunted. Au contraire! The ballet ligne dictates a plum line, and as such popos must point down at all times. It is not merely for the sake of appearance, but to center your dancing body around a strong axis. Form and function. 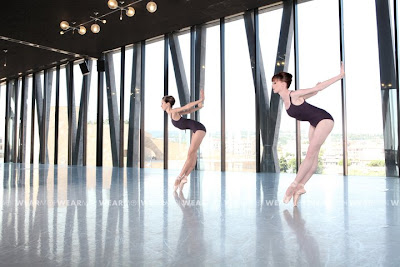 Unless of course there is choreography to tell you otherwise. If not, the popo never leads the way. If you do a developpé to the back, toes and heels and knees are lifted before the bottom is. If you do a lunge down, or a 6th port de bras, the same applies. As it does in preparations for en dedans pirouettes. Stick that popo out and the line is broken. It also throws you off your axis in turns. Think about it next time you´re in class. Point that popo down!
at November 20, 2011

Email ThisBlogThis!Share to TwitterShare to FacebookShare to Pinterest
Labels: Popo