Spot and Snap that Pirouette! 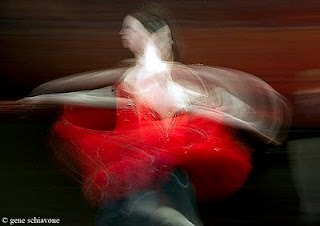 The strangest thing happened to me last ballet class.. We were practicing double en dedans pirouettes, and I was doing my usual of too much momentum combined with passé foot snaking around my supporting leg. I know that you need to finish the position before you turn and then hold it, but it always takes a conscious effort. Sometimes (okay, too often) I just throw myself into it, and there are times when that works too. It´s so awesome when you get to turn right on top of your axis; it feels like nothing can come between you and your pirouette!


It would be so sweet if all, or at least 8 out of 10 pirouettes would turn this effortlessly (instead of 5 out of 12).Then why, oh why, if I know all the theory and practice my turns as much as the next person in class, do those en dedans pirouettes keep failing me? One technical problem I already mentioned is not being in position before you turn. The other one, too much speed. For a double you really don´t need that much. It´s basically just one balance turning twice. I am also doing the deep plié beforehand, and push off and into the floor. But. I do have a real problem with spotting my turns. In fact I frequently don´t.
I still manage to pull off the occasional triples, on the sheer momentum of my speed - but pirouettes just do not look finished if that head does not snap neatly around on each turn. Oddly enough, I thought this was the main issue with me not spotting my turns, namely how it looks to the audience. I mean I can turn just fine without, right? Wrong. Last class I caught myself in the mirror just before I went spinning around and saw that my head was slightly tilted, kind of signalling "let´s turn this way!" Think about it, the human head weighs what, about 5 kg on average? Not surprisingly, it tipped me off  my axis each time. 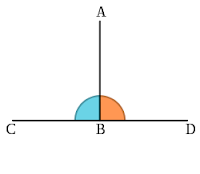 The segment AB is perpendicular to the segment CD because the two angles it creates (indicated in orange and blue, respectively) are each 90 degrees. Source: Wikipedia. For turning purposes, A represents my head / eyes, the segment AB my neck, CD my shoulder. I call it ballet physics.
Long post short: I figured it out! I concentrated really hard on keeping my head perpendicular to my shoulders, with my neck relaxed, eyes looking straight ahead and snapping my head around only at the last moment. I turned doubles with the least speed ever, and even my position was much improved (though it still needs work). I have not yet tried this with en dehors turns, but can´t wait to see what will happen.. Spot, snap, spot, snap!