Pointe class, final enchainement. Start with croisé, right leg in tendu derrière. Step forward with right leg passing through to croisé, corresponding arm opening to the side (other arm staying down). Repeat four times, presenting your fabulous-ness to the (imaginary) audience, looking like you own the stage. Then, coupé, and off you bourrée eight counts to the front, coupé again and eight counts back, with beautiful arms coming up and then reverse.

We stand in line, three girls, and the music begins. Four steps, all composed and lovely and then.. Hey, nobody told me this is was a race! The other girls have bourréed half-way across the room before I have even counted to two!


On another note: my teacher Marie-Pierre came to class with her knife, which is not as scary as it sounds. I was not happy with the hard shanks of my new pointes and she had suggested already earlier to cut my shoes into shape. This time I agreed, because class was still a struggle and getting over the box near-impossible. With my now-dead shoes I had just gotten there! I dunno why I ever decided to buy shoes this hard. Oh right, there was nothing else available in my size/width! M-P took out her carpet-cutter knife and was really careful not to rip the satin, since I only have the one pair. She told me that during her 18 years as a professional she used up one pair of pointes per day, especially when she had been promoted to principal dancer! You can do the math.. Anyway, the cut and improved shoes turned out really nice. Instant arches! 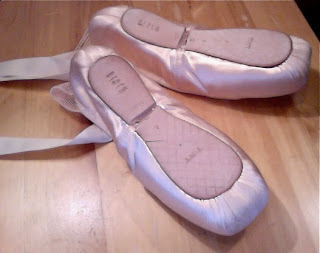 EDIT: It was pointed out to me, that the cut is not at the 3/4 mark - oops! What can I say, I´m terrible at math.. Anyway, as you can see in the picture above, the cut is closer to the 1/3 mark of the sole. Math aside, this is were the heel ends, or where the instep is at its highest. Cutting the shoe at this mark makes it hug closer to the foot!
at February 19, 2011