Pointe Shoes and Other News 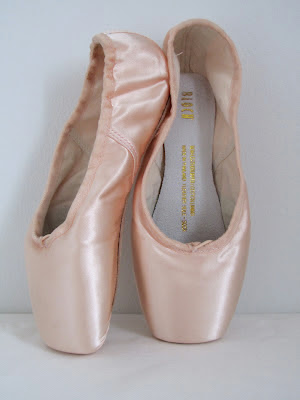 After somehow managing to dance in half-dead pointe shoes for weeks, I finally gave in before my ankles caved in. Out with the old, in with the shiny, pretty and new! And guess what? Since I started pointe in August 2010, this is only my fifth pair of shoes! The first pair I wore for about 5 months, and we had classes once per week. The second pair lasted as long, but then my class number increased and my strength improved. The last two pairs I have worn, Balance Europeans, are good for about two-three months, then it's time for goodbyes. Don't you just hate it? The moment shoes start to feel like part of your foot and your technique, you have to begin all over again.. But I do like mine, we have a nice relationship going. ;)

When I took them to my first class this week, my teacher told me to pay extra attention to my right foot. This one is not as strong as the left, and needs much more coaching to get over the box and stay in line. It has also to do with my leg length discrepancy (not freakish, but noticeable if you know to look). Anyway, it is really important to do every little relevé to your utmost cleanest maximum as the shoe is still molding to the foot. My teacher even told me to skip the more advanced stuff (I was doing a basic level class on pointe), until the shoe was broken in properly. The following day, the shoes felt near perfect already!

Which is a good thing too, as our classes are advancing all the time. There is the Paquita variation, and then there are pirouettes. Last week our pointe teacher Marie-Pierre decided to give us the same pirouette exercise we had done in the previous advanced class. Yikes! You start en face, from fifth, degagé devant with the right leg, supporting leg in plié - step onto piqué - passé retiré with the other leg, and repeat twice. Third time, you don't piqué, but do a full relevé with the supporting leg as the degagé leg envelopes back into retiré (arms in couronne). From there you go directly into fourth, and turn. The thing is, we have never really practiced pirouettes from forth in Madame's class. Not even preparatory ones at the barre. All we have done is quarter and half turns in center, but from fifth. Now we just went straight into the deep end!

Luckily, my other teacher has been introducing pirouettes in her pointe class - at the barre. And I have been practicing them in the basic level class I take (wearing pointe shoes). So it's not like I'm a pointe pirouette virgin.. ;) Still, it was a bit un-nerving. I mean, Madame must have thought we were ready. That, or she was testing us. Either way, it felt almost like an audition! But, you know what? I nailed my pirouettes! Singles, with one accidental double!

Another new step in center is a relevé from fifth into effacé, with the front leg extended in degagé. That one is much trickier than rising into passé retiré, because you are switching directions and the other leg can throw your balance off. It is very exciting, though, learning all these new steps! I was also very pleased when my teacher mentioned that my technique is much better now, especially considering how little time I have been up on pointe. I guess eighteen years of training in soft slippers has something to do with that.. :)

Awesome Nellie's lovely ballet skirts have arrived! Best prize I have ever won! Quick re-cap: Nellie decided to do Operation Tidy Room, Tidy Mind which resulted in an insanely generous Ballet-tastic Giveaway. I was the lucky person to write back first and got to adopt all three of Nellie's skirts. There is the black and very short pull-on from Bloch, and a very unusual by Grishko with a red under-skirt. My favorite has to be the red polka-dot, which is Designed by Alice. I was going to dedicate a post with pics to these ex-pat Brit skirts, but got pinned down by a most annoying tummy bug. Thankfully I'm feeling much better now. If I could only decide which skirt gets to take class first.. :)

I'm very, very excited about this. I talked to a lovely dancer from the Finnish National Ballet about how I would like to do a behind-the-scenes post for my blog. Daily routines, pointe shoes et al. Well, she thought it a great idea and already agreed to be interviewed. Then we talked some more, about the ideas I have and if I would like to talk to other dancers too (of course) and what sort of permission I would need.. She was very nice to pitch my blog to their Press Manager - and we have a take-off! I will be writing a series of posts for both my Finnish blog and this one, so stay tuned. More up-dates coming soon..
at March 09, 2012