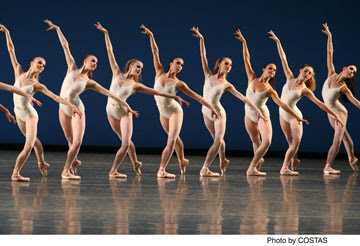 I get no kick on a plane. Flying too high with some guy in the sky is my idea of nothing to do.. No, I get a kick out of.. battemants and grand jetés, ballonés and pointe shoes, Balanchine and bourrées! I know there are other addicts out there, but we are not B.A.D. (Ballet Dorks Anonymous). No, we carry our addiction quite proudly, like hearts on our little sleeves. Never mind the dazed glazes of our friends and family, when we recap our classes to the last detail, again and again. Or when we go on and on about the finer points of a McMillan, Ashton or Ratmansky ballet. Or when we dissect the many virtues of Marcelo, Rojo or Hallberg. But thank the heavens and twitter for peer support - I know my non-dancing friends do!

If you don´t dance, you just don´t get it. If you do dance, you can´t do without. It´s a habit that feeds itself. The more you dance, the more you need your classes. Before you know it, you´re cultivating a daily habit. Okay, not daily. Even dedicated and driven dancers need to take a day off. If only to complain about their poor Monday shape the day after.. But your body gets used to it. I loved my Summer Dancathon, taking 5-6 classes per week. Now I´m back to three days a week, which is just not enough! I´m so desperate for more!

My dance-week starts on Monday, and boy do I feel that weekend break! Stiff and hardly any bounce in my body. Tuesday I´m back on my game again, Wednesdays are spent recovering from Tuesdays. Thursdays I´m climbing walls because there is no class (suitable to my schedule and requirements) and Fridays it´s back to advanced class and pointe, but I´m feeling the preceeding two-day break again. I know, I know -  it´s much better than one class or nothing at all, but what can I say? Both body and mind need a regular ballet-fix! 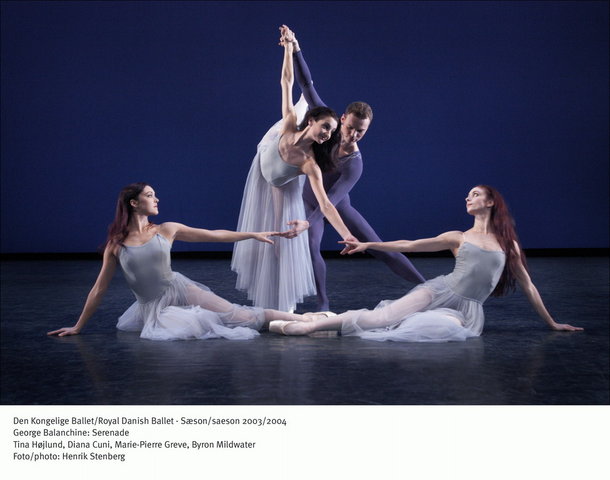 Yesterday´s class gave me such a buzz I´m still riding on its waves. We did a small bit of Balanchine´s choreography - intricate and quick steps and very different from my usual technique class. I´m not sure if it was out of Theme and Variations or some of Mr. B´s other ballets. I asked after class, but I´m sorry to say it did not stick to my memory. Which is funny because I do remember the steps. I gotta say that I absolutely adore Balanchine´s style of movement! And it´s a real privilege to learn (some) of the choreography from Madame, who has also danced in Balanchine´s Serenade (in the photograph above, "seated" right) and Apollo. Once you get your head and feet around the new steps and the speed and the accents, Balanchine is such a joy to dance. Not saying our attempts were any joy to watch though. But I did get a kick out of Madame´s demonstration!

My buzz did not end there. I got some very profound corrections, or lets call them directions instead. You see, I´m always told by my teachers to lengthen my back. I feel that I´ve done all I can, short of growing an extra vertebra. My line is plum, shoulders are mostly down, abs are strong, imaginary someone is pulling the top of my head, and imaginary someone other tugging in opposite direction. Still it is not enough. I can´t do a degagé before my teachers are on my case. Lengthen your back. Longer!

Again, it goes back to the idea of presenting yourself. I have been standing straight alright, but Madame with her keen eye for the tiniest detail sees that my upper back is holding me, well, back. It´s not so visible as to hit you in the face like a bun gone astray. But it is lacking something. Attitude. Non-apologetic presence. Finally, Madame tells me to lift my upper sternum, and for the first time I think I get it. At least the idea of it. It will take some time to become second nature, but until then I can just fake it. Present myself, instead of holding back. Dear Readers, this is more than relevation, this is a revelation!

I apologize if I´m causing buzz-envy, but it did not end there either. It appears I´ve been jumping my sauts in first all wrong. I´m not sure I do it all the time, but instead of extending my legs in an open première, I´ve been pointing my feet underneath me, with heels almost touching. No idea where I got that from. When Madame pointed this out to me, I was totally baffled (and a little bit embarassed). But: it was the easiest thing to fix. Ever!

Then we did the turning on pointe thing, not piqué turns, not sous tenus, nor chaînés déboulés ( I really have to ask next time). You start from fifth, raise straight onto pointe in fourth, bring back leg in (it stays in the back), turn and open front leg again into fourth, staying up on pointe the whole time. Repeat until you reach end of diagonal. Arms close from 1. arabesque position and open again. The video clip of Lander´s Etudes shows it best, although they cross the back leg to the front (forward to 1:45).


We did this slow, and it was hard. Up, legs together, turn, stay up, open leg, stay up.. Madame, who is not wearing pointe shoes, asked me to demonstrate and darlings, it was not pretty. But I did as I was told, and kept my weight forward and used my shoulder and the inside of my thighs and all the confidence and 'tude I could master. And it worked! By the time we turned to the left, I was having the best time!

Even when there are no short-cuts to technique, ballet remains a short-cut to Happy. Buzzz...