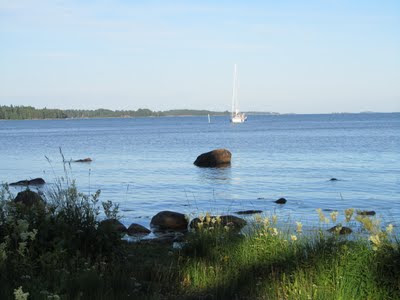 I really could get used to this way of life.. It´s Sunday afternoon, and I´m as relaxed as can be. No getting ready for another week in the office, instead 14 more days of vacationing and loads of ballet. Daily ballet in fact. What a nice ring that has. Dai-ly bal-let. I´m sorry to rub it in, especially to any reader who has to wait until the end of summer for their dance studios to re-open. But I really had forgotten what a difference it makes in your dancing! Everything becomes more natural, more responsive and less strained. Oh, and let´s not forget the gorgeous outdoors, the beach and the sun! It all makes for one seriously happy combination.

Roll out your landing gear!

Beginning of this week, it almost came to an untimely and disastrous end. I landed badly from a jump. We were practicing grand allegro in center, traveling in four diagonals. Tombé pas de bourré - glissade - grand pas de chat - contretemps - repeated three times - and on the final fourth sequence, instead of grand pas de chat one big saut de chat. This is where you start like a pas de chat, but developpé the front leg in mid-air. It is a new jump for me, tried it a couple of times, but certainly not part of "my repertory". On the left, it went suprisingly well, but on the right.. Oh dear. I had traveled too far, and was jumping off-mirror, without any visual feedback. Mid-air I did something weird, and suddenly had no sense of my placing and timing. It was like flying in the dark, without radar. I came down with my left landing gear still in, that is on pointed toes. Ouch!
Luckily I landed on two feet, and the toes of my left foot kind of rolled under. God, I would have fainted at the sound of breaking bones! Most of the impact I felt between the third and fourth metatarsals, right at the base of the toes. There was some minor bruising the next day, and I went right back to class. It really only bothers me coming down from a big jump, and on one foot. Which I stupidly keep forgetting. Somehow I have managed to bang the same spot every class, until I had the better idea of easing off it. Last Friday I only did some lite big jumps, and with the added weekend-break the sorry foot seems to be okay now. I hate to think that my dance-vacation could have gone to the dogs..

You win some, you lose some, sometimes it rains, and sometimes you get to dance.

Alas, it did not. Phew. Tuesday I went to The Other Place, to try out a different class and a new teacher. Hmm.. What can I say? Every dancer experiences this. Sometimes you come across a class which would have been terrific at another point in your "career", but now it just does not happen. I did appreciate this newly graduated teacher´s eagerness and the knowledgeable preparation that went into the class. She even brought along textbooks and pictures, which we proceeded to look at mid-barre.. For me, however, this disrupts the flow and pace of the lesson. Even though it is commendable that a teacher has such keen interest to share her knowledge with students. As long as you balance theory with practice. Class is short enough at 60-90 minutes.
The anatomy & alignment lecture, however, was not my reason for not "feeling" the class. I know many others who did. A friend of mine was quite excited after class, saying that she really liked this teacher. I don´t consider it bad judgement at all, it merely goes to show that there are different needs at different times. In the past two years I have been learning a lot of new things, about technique but also about what actually happens between the steps. I have written a lot about it in this blog, but to recap: it has to do with breathing and elongating, phrasing the music, bringing something of yourself into it, of telling a story with the very first movement. There is still focus on very clean technique, but with a new emphasis on expression and artistry. It has been both a relevating and liberating experience.
The zen of ballet class
It is also the very antithesis of robotic dancing, something our teacher M-P disdains greatly. This class at The Other Place had nothing to do with robots, thank goodness, but the movement quality is somewhat sporty, with stick-it-out-there tendu degagés and bouncy pliés. There are some beautiful cambrés, but mostly class feels like a hurried gym exercise. There is a lot of choreography even for the first pliés and tendus, and I can see how others like as much variety as possible.. But it´s not the best way for me to get going. I need that moment of zen to find my center. Give me a simple beginning, some beautiful music and I´m a happy (and properly warmed-up) dancer already! Must be my old age ;) So, despite one very energetic teacher, and lots of sensible focus on anatomical placement, I leave class without my usual après-ballet buzz. I gave it another go on Friday, even switching levels, but with the same result. Class just feels like I´m taking a step back into the wrong direction. But it´s not the teacher´s fault.

Classes with my own school´s Summer Sub are, on the other hand, getting better every time. The barre is still a little too short & lite for my liking, and I wish we could repeat at least a third of it. I am not the only one who thinks the same, and we are currently wondering if and how we should bring this up.. The exercices are good, we just want more! There are also considerably less corrections at the barre, at least compared to our regular teachers (and even less than at The Other Place). Much more focus is placed on correct breathing - very important - and economical movement. This is something our other teacher, M-P, has also talked about. You can´t be at 110% all the time, or your dancing will look contrived, instead of effortless. It is something that is very hard to teach in the beginning, as muscle memory and strength have not yet developed. But it is a valuable lesson, one that I´m continuously learning. 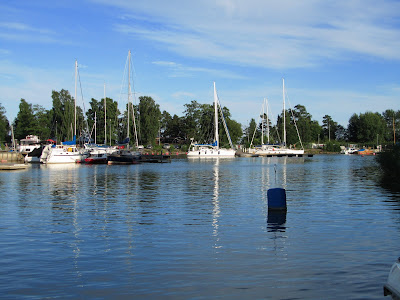 Oh dear, this is turning into a mid-term paper, not a blog post. I do hope you´re not tempted to surf elsewhere before getting to the closing sentence.. Please let me know if I´m writing too lengthy posts! I was actually planning to do daily short posts this week, but it has been to darn hot to blog. Anyway, it has been a terrific week, even with the classes at The Other Place. You always learn something, maybe a new step, or a new pointe of view. Sometimes there are ahaa-moments, thrills and triple pirouettes. Sometimes it´s just a work-out. But it´s all good. Good to be alive, and dancing.